Yuri!!! on Ice Wikia
Register
Don't have an account?
Sign In
Advertisement
in: Pages with reference errors, Characters, Main Character,
and 8 more
English

View source
watch 02:12
'Yuri!!! on Ice' Profile: Yuuri Katsuki
Do you like this video?
Play Sound

Yuri Katsuki (official/canon spelling) Japanese: 勝生 勇利, Katsuki Yūri) is a competitive figure skater and is the protagonist of Yuri!!! on Ice. He is engaged to Victor Nikiforov. 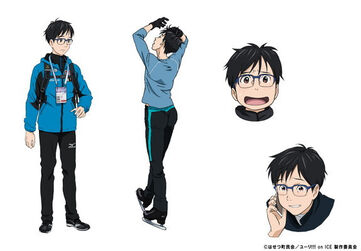 Yuuri has short, messy black hair and brown eyes. Yuuri wears half-rimmed blue glasses, but while he is skating, he removes them. He combs his hair backward when performing his programs before a crowd.

Yuuri wore layers of clothing to hide his weight gain from binge eating. His warm-up outfit is usually a jacket and black pants with a stripe down the side. He wears gloves while skating and uses skates with standard blades.

Yuuri gains weight easily, but when he is in top form, he also has slight muscle due to his exercise and ice skating. Nonetheless, his body, especially his face, maintains a soft appearance, regardless of physical form.

Following Yuuri's presumed engagement to Victor Nikiforov while in Spain, he wears a gold ring on the ring finger of his right hand. Victor has a matching ring worn on the same hand and the same finger.[1]

During his short program, Yuuri wears a black outfit decorated with crystal-like embellishments on his shoulder and waist and a swath of fabric on one hip.

During his free skate, Yuuri wears a dark blue suit-like outfit that is fastened by a gray belt and is decorated with shimmering embellishments.

Yuuri is known to be "the figure skater with the world's biggest glass heart." He is soft-hearted and easily devastated in the face of failureーso much so that he can slip into a depression for months at a time. He is a kind, quiet and easily embarrassed boy, but he is also shown to be stubborn and extremely competitive.

After being taken under Victor Nikiforov's wing as a student, Yuuri begins to steadily develop more confidence in himself. He becomes determined to chase his dreams, and even brushes off most of Yuri Plisetsky's attempts to insult or humiliate him.[2] However, he still becomes easily discouraged and anxious and doesn't know how to deal with being the person to beat.[3] [4]

During competitions, he tends to be a bit colder and more self-centered due to his anxiety and competitive nature but is learning to pay more attention to those around him thanks to Victor.

Yuuri was born in Hasetsu, Saga Prefecture, Kyushu, Japan, where his family owns and operates the last bathhouse inn remaining in the town.

Yuuri began figure skating as a child at Ice Castle with his childhood friends, Yuuko Nishigori and Takeshi Nishigori. His ballet teacher, Minako Okukawa, was the one who had recommended him to learn figure skating.[5]

When he was 18, Yuuri moved to Detroit to train under Coach Celestino Cialdini and ended up staying there for five years. While there, he became friends with his roommate, Phichit Chulanont.

Yuuri has a very well-developed, unique step technique that has been fine-tuned due to the amount of time he spends on the ice. He is also known for his spin sequence more than his jumps, which both Minako and he himself acknowledge. It was only his performance in Skate China where his technical score eclipsed that of his presentation score.

Yuuri has a lot of stamina, which is especially useful for the free skate, and for planning jumps in the second half of the program, and netting the 1.1x point bonus that comes with them.

Yuuri has been taking ballet lessons for even longer than he's been a figure skater. In addition, he has also been shown to be skilled in other dance disciplines, like break-dancing, interpretive and ballroom dance, and pole dancing, although it is unknown where he had learned them.[1]

Yuuri was a huge fan of Victor's ever since he was a child, and it has greatly inspired him to skate. An early wish of Yuuri's was to be able to meet Victor on the ice at a similar level and to one day surpass the Russian. Yuuri's admiration of Victor led him to get a poodle, similar to the one Victor owned and named it after him as well.[6]

Victor walks into Yuuri's life after watching Yuuri perfectly replicate his free skate, 'Stay Close to Me'.[6] As a coach, Victor initially only trained Yuuri physically, but after noticing that his emotion tended to affect Yuuri's skating, Victor made an effort to get to know him on a more personal level. Yuuri was first rather afraid and distant from Victor, but as the days went on, he became closer to the Russian. Yuuri's free skate, and eventually, the short program as well, is dedicated to Victor.

Yuuri grows close to Victor to the point where he becomes afraid that his actions would have consequences on Victor. He also becomes afraid that Victor would leave him, begging Victor to always remain by his side. Yuuri also spontaneously changes the final jump of his free skate into Victor's signature jump in a bid to surprise Victor. In response, Victor knocks Yuuri onto the ice with a kiss after the program was over, saying it was the only way Victor could surprise Yuuri more.[4] In Barcelona, before the Grand Prix Final, Yuuri presents Victor with a gold ring as a birthday/Christmas present for the Russian. Victor also places a gold ring on Yuuri's finger, and later says the pair of rings to be engagement rings (although it is unknown whether he meant it seriously or just as a suggestion), stating that they would get married when Yuuri won gold at the GPF.

It was revealed that Victor's first true personal encounter of Yuuri was during the previous year's GPF, where they had danced together. Yuuri had also begged Victor to come to the family hot spring and to be his coach. Yuuri, having been drunk at the time, has no memory of this first encounter.[1]

After the Barcelona Grand Prix Final, Yuuri moves to Saint Petersburg, Russia, to be with Victor.[7]

Yuuri Katsuki’s first true encounter with Yuri Plisetsky was during the Sochi GPF banquet, where he had drunkenly challenged Yuri to a dance-off. Yuuri Katsuki has no memory of the meeting, but Yuri Plisetsky remembers this and keeps pictures of the banquet on his phone.[1]

Minako is Yuuri's ballet teacher and one of his biggest supporters. She often follows Yuuri to as many competitions as she can, whether local or international. The two share a relatively close relationship, and Minako cares for Yuuri much like she would a son. Yuuri used to spend more time at Minako's ballet studio than he would at home. Minako was the one who encouraged Yuuri to try figure skating in the first place[5].

Yuuko is Yuuri's childhood friend. She was the first to introduce him to Victor's skating and the two of them practiced moves together. Yuuri's first replication of Victor's free skate "Stay Close to Me" was dedicated to Yuuko. Yuuko asks Yuuri to call her Yuu-chan considering how close they are, which Yuuri does at first, but later settles for calling her Yuuko-chan. Yuuko is highly supportive of Yuuri's skating career and hopes that she could see Yuuri compete against Victor one day.

Yuuri and Phichit were roommates and rink-mates during their time together in Detroit under Celestino's coaching. Phichit is shown to be familiar with Yuuri's skating style as a result. The two of them are very close, as Yuuri is comfortable with calling him at night and using basic Thai in their conversations.[8] Phichit's flashbacks often show Phichit sharing his hopes and dreams with Yuuri. Victor reveals that Phichit is the only foreign skater that Yuuri truly regarded as a friend. Phichit also refers to Yuuri as his best friend[1] and is supportive of Yuuri and Victor being together.

Celestino was Yuuri's former coach. Celestino always tried to encourage Yuuri to have more confidence in himself, but it almost never seemed to be effective. Yuuri is slightly afraid of Celestino, especially after having left Celestino's coaching, but Celestino does not have any ill-feelings towards Yuuri, and still hopes Yuuri would do well in competitions.

Yakov and Yuuri barely interacted until the Rostelecom Cup free skate, where Victor had to leave for Japan to watch over Makkachin's operation. Yuuri is rather afraid of Yakov and does not talk to the coach during practice for the free skate. However, after Yuuri finishes his performance, Yakov starts lecturing Yuuri at the kiss and cry, which Yuuri notes are very similar to Victor's behavior. After the scores are announced, Yuuri hugs Yakov and thanks to him in Russian.

Short - In Regards to Love: Eros

The program itself is completely backloaded and consists of a step sequence in the first half, and three jumps (as per ISU regulation) in the second half. The first jump is a Triple Axel from a spread eagle, the second is a Quad Salchow, and the last is a Quad Toe-Triple Toe combination.

Yuri on ICE is an original composition written by Ketty Abelashvili, a friend of Yuuri's from his days in Detroit. It was originally written to represent his career in figure skating but has since been redone to not only encompass that but also Yuuri's journey in realizing what love means to him.

The program itself features twelve jumps in all, with seven of them being in combination (thus not violating the eight jump element rule). The first half of the program features a Quad Toe-Double Toe combination, a quad Salchow, a Triple Loop, a Triple Axel, and a Triple Flip. There's a brief intermission period with additional figure skating elements, starting with a lunge, then a spread eagle, and then an Ina Bauer. The second half consists of a Triple Axel-Single Loop-Triple Salchow combination, then a Triple Lutz-Triple Toe combination, then the step sequence. The last jump is a Quad Toe Loop

During the Cup of China, Yuuri spontaneously changes his last jump to a Quad Flip. He reverts to the Quad Toe Loop for the Rostelecom Cup. During the Grand Prix Final, Yuuri spontaneously changes his Triple Loop into a Triple Flip, and his Triple Flip into a Quad Toe Loop, in order to increase the difficulty of his free program. He also makes his final jump a Quad Flip, as previously performed in the Cup of China.

Exhibition - Duet: Stay Close to Me

Yuuri skates his own exhibition skate but not in solo. He does it alongside Victor as a pairs dance.