Yuri!!! on Ice Wikia
Register
Don't have an account?
Sign In
in: Characters, Main Character, Male Characters,
and 5 more
English

View source
watch 02:13
'Yuri!!! on Ice' Profile: Yuri Plisetsky
Do you like this video?
Play Sound

Yuri Plisetsky (Russian: Юрий Плисецкий; Japanese: ユーリ・プリセツキー, Yūri Purisetsukī) is a competitive figure skater and one of the main characters of Yuri!!! on Ice. He is the second Russian character introduced.

Yuri was raised by Nikolai Plisetsky (Yuri's paternal grandfather), in Moscow, Russia. As a result of this, the two have a very close relationship, even closer than with his own mother. Yuri's mother was a former Russian idol who retired from show business early on.[3]

Yuri began figure skating at a young age, and later chose to move to Saint Petersburg from Moscow to train under the guidance of Yakov Feltsman. He is part of the new generation of Russian figure skaters, and had dominated the Junior circuit before moving on to his Senior debut. He is the two-time consecutive Junior World Champion and two-time consecutive Junior Grand Prix Final Champion.

Yuri has incredible talent who is described by many to be a rising star in the figure skating world.

Yuri has blond, chin-length hair that covers the right side of his face and viridian-colored eyes. He is short-statured with a skinny frame; because of his appearance, he is nicknamed the Russian Fairy.

His warm-up uniform is either his training outfit or his costume under a black zip-up hoodie with black pants, sneakers, and a zip-up baseball tee styled runner with "Russia" across the chest. His skates have special blades that are said to make it easier to perform jumps. When not in performance costumes or warm-up gear, Yuri loves to wear clothing with mainly big cat prints. 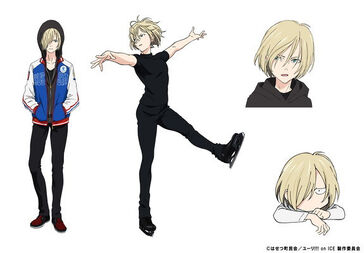 Yuri is a very ambitious boy who is determined to become the best of the best in figure skating. Contrary to his beauty and grace on the ice, once Yuri steps out of the rink he becomes foul-mouthed, rude, and dismissive of othersーearning him his second nickname, the Russian Punk. To ensure he gets what he wants, Yuri is not above threatening or intimidating his competition. He is short-tempered and very accustomed to yelling.

Yuri is both very critical of himself and determined to impress Victor. He despises being underestimated and projects a strong air of confidenceーstrong enough to come across as arrogance, instead. He is prone to seeing other athletes as his rivals, and therefore his enemies. While Yuri has been noted to not take training seriously at first,[4] he can undertake highly rigorous training to do well, and does so without complaining.

A softer side to Yuri's personality can be seen when he thinks of his grandfather,[5] and later when he gives Yuuri Katsuki some Pirozhki for his birthday.[6] Yuri also shows this side of him to the few people he regards as friends, most notably Otabek Altin and Yuuko Nishigori.

Yuri is shown to have an amazing amount of jumping ability starting from a very early age; when he was twelve, he landed a quadruple salchow (4S) during a local competition, despite being scolded by his coach frequently about it being too early for him to start such difficult jumps.[1]

In Agape, his quads are planned for the second half to maximize his score. In Allegro Appassionato, he can execute 6 of his 8 jumps in the second half, again to boost his score. This may imply that he has a good amount of stamina.

His signature as a junior was his combination spins. He can hold spirals and spins in a half-Biellmann position, which is a rarity in men's singles due to the flexibility that it requires.

Yuri is shown to have been practicing ballet as part of his cross-training regimen for at least as early as ten years old. He takes it up again seriously when Lilia is invited by Yakov to train the skater for the Grand Prix series.[4]

Yuri initially looked up to Victor as a skater, and had idolized him since he was very young. The two of them are rink mates under Yakov's guidance, save during the time Victor left Russia to coach a Japanese boy named Yuuri Katsuki.

Victor first took notice of the younger skater after he had attempted a quad in competition, despite it being physically dangerous since Yuri was still young, and promised to choreograph for him a program that would ensure victory for his Senior debut if Yuri won the Junior Grand Prix without any quad jumps.[1] Yuri becomes determined to prove himself to Victor as a skater. Victor eventually arranges a short program for Yuri after the latter won the Junior Grand Prix and traveled to Hasetsu, demanding that Victor should keep the promise.

As the series progresses, Yuri's perception of Victor changes. He no longer looks up as much towards Victor, disappointed that Victor had left competitive skating to coach Yuri Katsuki.[7] Despite this, Victor still cares very much about Yuri and was overjoyed when Yuri beat his short program world record.[8]

Nikolai is Yuri's grandfather and is the person Yuri loves the most, even over Yuri's own mother. Nikolai usually does his best to attend competitions held in Moscow that Yuri participates in. He often makes pirozhki for Yuri.[2] After hearing about Yuri's newfound love of katsudon, he creates the katsudon pirozhki, thereby combining two of his grandson's favorite foods.[6]

Yuri's short program very much centered around his love for his grandfather, in which Nikolai is shown to be very proud of Yuri.

Even though most of the time Yuri Plisetsky is rude to Yuuri Katsuki, he is still shown to care for him. Yuri Plisetsky instinctively cheers Yuuri Katsuki on when the latter was seen to be underperforming during the Rostelecom Cup free skate due to stress, and later offers him some katsudon pirozhki for his birthday.[6] Yuri Plisetsky becomes upset after Victor implies that Yuuri Katsuki planned on retiring should he win gold at the Barcelona Final - a far cry from his initial wish for Yuuri to drop out of competitive skating. To prevent Yuuri Katsuki's impending retirement, Yuri Plisetsky vows to prevent him from winning.

Yuri Plisetsky rarely refers to Yuuri Katsuki by his proper name, instead preferring to call him by the nickname "Katsudon" ("Pork Cutlet Bowl" in the English dub), as both a play on Yuuri's surname Katsuki and Yuuri's love for katsudon.

After following Victor to Japan, Yuri meets Yuuko. Yuuko is friendly and supportive towards Yuri, helping him train for the "Hot Springs on Ice" event and showing concern for him when he decides to leave Hasetsu after Yuuri skates his program. The two keep in contact through texting, with Yuuko giving Yuri constant updates on the training situation at Ice Castle Hasetsu.[4] Yuuko is one of the people that Yuri thinks about before delivering his free skate at the Grand Prix final.

Yuri and Otabek become friends after Otabek rescues Yuri from his fans in Barcelona. They had initially met five years prior at Yakov's summer training camp but Yuri had no memory of the meeting. Otabek notes that he had first begun to notice Yuri because his eyes had resembled those of a soldier eyes, and tells him that he feels like they have a lot in common.[7] The two of them are supportive of each other, cheering for each other during their individual programs.

Otabek is strict with Yuri, not allowing the younger skater to tag along to the club he was heading to, as Yuri is underage. Yuri, with the help of Guang Hong, tracks Otabek to Poblenou. He is amazed by Otabek's love of rock music, finding one that he likes as well. He later asks Otabek if he could use the song for his new exhibition skate.[9] The next day, Yuri asks Otabek to join in the former's exhibition skate after seeing Victor joining Yuuri Katsuki's Stay Close To Me, to which Otabek obliges.[10]

Otabek's abilities in being a DJ and motorbike riding are traits beyond skating that Yuri considers to be cool.[11]

Jean-Jacques has no ill feelings towards Yuri and often teases the younger skater. Yuri greatly dislikes Jean-Jacques as Yuri says that Jean-Jacques is the only person who is more annoying than Victor Nikiforov and Yuri Katsuki.[2]

Yakov is Yuri's current coach. He often scolds Yuri due to his attitude and disobedience. However, Yakov treats Yuri like a son, eating Pirozhki with Yuri[12] and embracing the young skater when he broke Victor's short program record. Yakov sometimes sees Victor in Yuri, both in his skating and his actions. Yuri is quite rude when speaking to Yakov, but cares for his coach.

Lilia is Yuri's ballet coach and free program choreographer. She also choreographed Yuri's original exhibition skate, until Yuri chose to change his program the night before. She is strict when teaching Yuri, but is also very motherly towards him, sometimes shedding tears of pride during Yuri's free skate performances. Yuri stays at Lilia's house with Yakov throughout their training for the Grand Prix series.

Yuri is Mila's rink mate under Yakov's guidance. Mila treats Yuri like a younger brother and enjoys teasing him. Nonetheless, she has also been shown to be willing to extend help to him when needed.[12] Yuri usually refers to her as "Baba" (meaning 'grandma' or 'old lady') as a play on Mila's surname, or "old hag" in the English dub.

Short - In Regards to Love: Agape

The song is one of two different arrangements, written to encompass two different aspects of love. Agape is defined as selfless, all-encompassing love.

The program is choreographed in-series by Victor Nikiforov.

The song is described in-show as being well-known for its difficulty and heart-pounding intensity.

The program is choreographed in-series by Lilia Baranovskaya.

Exhibition - Angel of the Fire Festival

Angel of the Fire Festival was Yuri's original exhibition skate before the GPF. The program was choreographed by Lilia Baranovskaya. Yuri chose not to skate this piece after the GPF because he believed that it would remind people too much of his free skate.[10]

Exhibition - Welcome to The Madness

The song is chosen by Yuri after hearing Otabek Altin play it in a rock club. The program is choreographed in-series by Yuri himself.[9] Otabek joins Yuri in this exhibition skate, standing by the side of the rink and assists Yuri in removing the latter's gloves.

Català
Community content is available under CC-BY-SA unless otherwise noted.