View source
watch 02:16
'Yuri!!! on Ice' Profile: Victor Nikiforov
Do you like this video?
Play Sound

Victor Nikiforov (Russian: Виктор Никифоров; Japanese: ヴィクトル・ニキフォロフ, Vikutoru Nikiforofu) is a figure skater, coach, and choreographer. He is Engaged to Yuuri Katsuki, and is the deuteragonist of Yuri!!! on Ice.

Victor is considered a living legend in men's singles figure skating. He's won five consecutive World Championships, five straight Grand Prix Finals, and numerous European championships. By the age of 16, he was already at the top of the figure skating world, under the guidance of his coach Yakov Feltsman.

Victor is a handsome man with short platinum hair with bangs that cover his left eye, and he has light blue eyes. During competition warm-ups, Victor wears a white and red runner jacket over his costume. 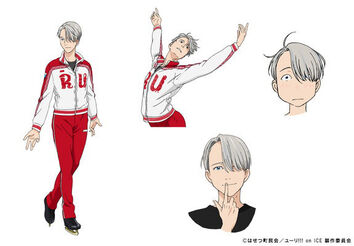 Victor is fond of wearing trench coats over his outfits when in cold places. He owns several in various colors, including beige, brown, and slate blue.

As a junior skater, Victor had long, waist-length hair, which he usually wore his hair in a ponytail when skating. His costumes often had both feminine and masculine elements to them.

In Barcelona, Yuuri places a golden ring on Victor's right-hand ring finger, which Victor later suggests to be an engagement ring. After this, Victor is always shown wearing his ring. Yuuri has a matching ring on the same finger of the same hand.

Victor has the captivating kind of celebrity charisma and is naturally flirtatious. His well-known strength is his penchant for breathtaking new creations and surprising his audience. Though he pushes himself and is constantly trying to better his skills, he likes doing things at his own pace and in other areas is generally an easygoing, free-spirited young man who doesn't really take well to orders (Yakov yells in exasperation that he never does anything he's told).

Victor's also a bit of an airhead and, according to himself and Yuri Plisetsky, tends to forget a lot of things, as Yuuri Katsuki sees proof of after he forgets what the stakes of the Hot Springs on Ice event were.

He's very self-aware, knowing what he can and can't pull off and exactly what he has to do in order to play best to the audience. This adds to his charisma in that he knows precisely how to charm people with what he has. That said, he's also sensitive about his appearance, even his hairline.

Being a nigh-imperturbable man in perfect control of himself, even when losing his temper, Victor is well-adapted to navigating the positive side of the emotional spectrum. However, he's not very good at managing others' emotional distress, and while he can be serious if he needs to be, he's blunt to the point of being tactless. This makes him a bad person to cry in front of, as he's awkward at best and insensitive at worst.

Even though he mostly exhibits a childlike and almost flippant demeanor, his core does emerge every so often: a wildflower, beautifully soft but determinedly hardy. Though this side of him only gets a peek when he talks to close ones regarding more philosophical topics, it's very at home on the ice.

Victor is shown to have a very high level of skill in landing difficult jumps. His signature move is the quadruple flip, and he has been shown to be able to cleanly land three more quads. As such, he is able to do at least four out of the five currently ratified quads. He's also able to do a triple axel with a back counter entrance, and a quad toe-triple toe combination right at the end of his program. Given that he can land all these quads, Victor would be able to land their triple counterparts as well.

Compared to Yuuri Katsuki, Victor doesn't have as high stamina, as such arranging his more difficult (and therefore more fatiguing) jumps early on in his performances, relying on his presentation score to make up for the absence of the 1.1 multiplier in the second half.

Victor is shown to be at least an adequate choreographer, as he choreographed 'Stay Close to Me,' and 'On Love: Eros and Agape,' all of them being winning performances. His arrangements are shown to play to the strengths of each of their skaters; he adjusts 'On Love' to better fit the styles of each Yuuri even though he originally made them for himself.

Yuuri arouses Victor's curiosity after a video of Yuuri perfectly replicating his free skate program "Stay Close to Me" goes viral. He decides on his own to fly to Japan and coach Yuuri to victory in the coming season, in which he moves into Yu-Topia Katsuki, and spends most of his waking hours with Yuuri. Victor enjoys teasing Yuuri and is very physically affectionate with him. Though Yuuri is at first not very comfortable with the physical contact, he becomes used to Victor hanging off of him for prolonged periods of time.[1]

Victor is inexperienced as a coach and often has difficulty learning how to properly deal with Yuuri's general emotional stress and his performance anxiety in particular.[2] Despite this, he tries his best to support Yuuri and cheer him on. In return, Yuuri strives very hard to impress Victor.

In Episode 10, Christophe and Victor talk about the banquet after the Sochi GPF, revealing—to Yuuri's horror—that that was their actual first encounter. During that party, Yuuri had swung Victor out to dance, invited him to Hasetsu, and begged him to be his coach. Of course, the blackout-drunk Yuuri had no memory of this.

There are two significant turning points in their relationship. The first is after Yuuri spontaneously changes his free skate's last jump into a quad flip (Victor's signature move) at the Cup of China. When Yuuri dashes to the kiss and cry, Victor makes good on the first part of that moniker by knocking his protégé back onto the ice with a kiss. The second is just before the Barcelona GPF free skate, when Yuuri buys a ring for them each, as a traditional reminder of the love they eventually came to have for each other.

Victor and Yuri shared the same coach, Yakov Feltsman. Several years beforehand, Victor had watched one of Yuri's performances. Impressed with the younger skater, Yuri and Victor made a deal where, if Yuri were to win his Junior Grand Prix Final without attempting any quads, then Victor would choreograph a program for his Senior Division debut.[4] Victor is aware of Yuri's determination and ambition and uses it to push him harder during the short period that he coached Yuri.

Yuri initially respected Victor as a senior skater and as a living legend. Yuri's perception of Victor changes as the season progresses as he no longer looks up to him. He also sees Yuri Katsuki as more of a threat than Victor had been.

Being quite close to Victor, Yuri was accustomed to Victor's forgetfulness.

Makkachin is Victor's beloved pet poodle and constant companion. Victor is very fond of Makkachin, bringing Makkachin from Russia to Japan, and then later back to Russia. Victor's love for Makkachin is truly shown when he returns to Japan to oversee Makkachin's operation after the latter choked on some sticky buns, despite having to leave Yuuri Katsuki alone in Moscow. Victor's wanting to spend more time with Makkachin is one of the reasons Victor decided to leave competitive skating.[5]

Victor and Christophe have known each other for at least ten years, and have often competed against each other. Christophe sees Victor as his motivation for skating and aspires to surpass him, and is unable to understand why Victor left figure skating to coach Yuuri. However, they are shown to be good friends off the ice.

Yakov is Victor's current coach. Victor refers to Yakov as Coach Yakov, even after leaving Yakov's guidance, and Yakov calls Victor by the diminutive Vitya. Yakov is often angry with Victor, as Victor tends to be disobedient to Yakov's instructions. Yakov is upset when Victor chooses to leave Russia to Japan, believing that the latter would not be a very good coach. During the Barcelona GPF free skate, Victor expresses his wish to return to competitive skating, most likely under Yakov's guidance.

Free - Aria: Stay Close to Me

The real-life choreographer Kenji Miyamoto describes this program as statuesque, meant to show off Victor's throat and jawline.[6] In-series, Victor choreographs the entire program by himself.